After studying the plans and Peter Johnson's superb website, I have decided to borrow Peter's idea and use AN eyebolts for the elevator and rudder hinges. BHP plans use a similar system but needs welding. Im not a very accomplished welder...yet! 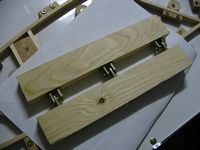 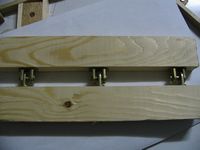 *UPDATE - After speaking with a LAME friend he suggested I make the eye bolts central and use AN washers of similar metal, to guard against corrosion, either side of the central eye bolt. Peter has used the original idea on his with no troubles but having the washers will add to the bearing service.* 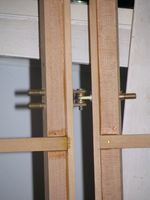 I collected the Spruce for the Empenage from Tom in Newcastle today - 18th July 2010.

*There is a discrepancy in the measurements on the plan. If you build to the plan dimensions the rudder will be slightly too long. I didnt see this till after I built the rudder but just added the difference to the top of the vertical stabiliser.*

After clearing a space on my building bench, I screwed a square strip of oak to the edge as a straight guide to build the leading and trailing edges of the rudder. Rather than rebating one solid piece of spruce, I glued two pieces together to achieve the same dimensions and supposedly a stronger piece. 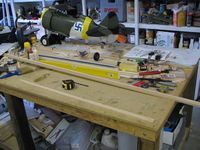 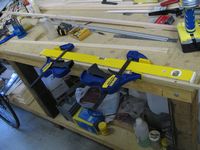 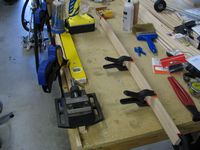 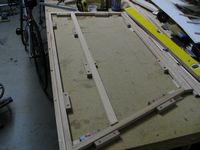 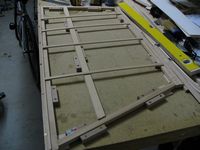 Rudder is now complete. I am really enjoying using the T-88 Adhesive. It is easy to work with, can use it in all sorts of temperatures and has a long working time so you dont have too rush. So far all my glue samples have split through the wood and not the joint so all good! 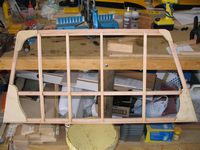 Vertical stabiliser all framed up and ready to be glued. Before I glue I will drill the holes for the eye bolt hinges as the trailing edge will be easier to hold when drilling. 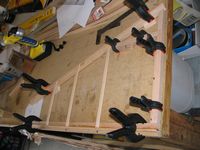 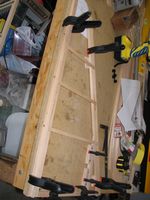 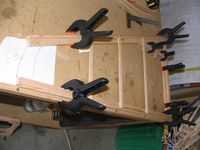 Rudder & Vertical stabiliser temporarily hinged together. Will gusset vert stab when I do the Elevators. 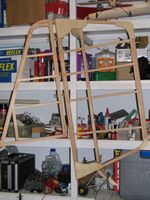 Framing up the Elevators. Will drill hinge eyebolt holes before glueing. 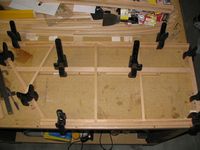 As I did with the rest of the empennage, I screwed a straight edge along the edge of the work bench. The leading and trailing edges are two pieces glued together rather than routing the step from a single piece. 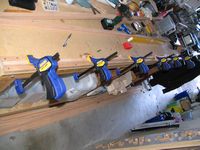 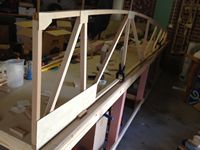 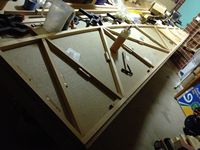 The laying out of the Horizontal Stabiliser. As can be seen in the third photo below, dont foget to pack under the leading edge and centre beam so the surface is built symetrical. Just waiting for the two end sections to be run through a thicknesser. Once that is done I will drill the holes for the eyebolt hinge setup and glue everything. 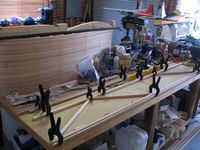 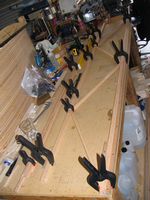 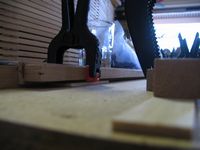 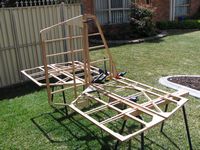 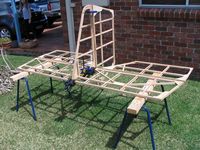 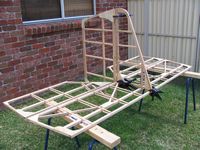 Brackets to mount the tail fabricated and mounted... 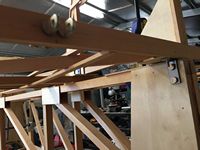 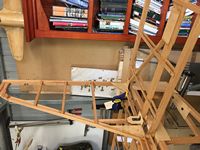 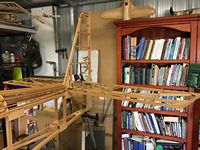